What Do You Call a 53-Year-Old Man Who Has Sex With a 9-Year-Old Girl? 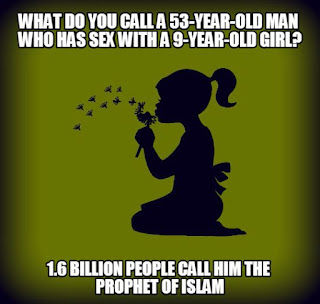 This is not counterjihadist propaganda. Islamic scholars and imams around the world accept it as an historical fact that Muhammad, the prophet of Islam, married his favorite wife, Aisha, when she was six years old and consummated his marriage with her when she was 9.

This would be inconsequential except for two very important things:
Unfortunately, the problem isn't confined to marriage. Muhammad serves as a model of conduct in other ways. He ordered non-Muslims assassinated for criticizing Islam, he aggressively conquered non-Muslims through war, he tortured, he raped, he owned slaves, and much more. And his example has been preserved in writing for all time.

This presents an ideological barrier to the global (or even local) coexistence we seek. The first step in overcoming this obstacle is certainly acknowledging its simple presence. If Islam was a dying religion, maybe we could just ignore it and let it fade away, but it is the fastest growing religion in the world, and the percentage of Muslims who are moving from casual believers to fundamentalists is also growing. It's something we'd better face. And soon.
Posted by Styrke Vennlighet at 1:34 PM